Due to COVID-19 restrictions, the FOCUS ON LIFE Annual Benefit Dinner has been postponed until Spring 2021. While the dinner may be on hold, the fight for life continues! Please support ​Berrien County Right to Life by becoming a member.  To download a Membership Application, click on Contact on this website. For information about the dinner or Berrien County Right to Life, click to contact pastorlinda@riveroflifemi.com. 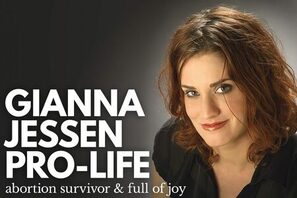 pro-life advocate.
speaker. writer. singer.
God’s girl. living the impossible.
Gianna Jessen was intended to die before she was born, just another one of the 1.2 million abortions each year in the United States. Instead of death, though, Gianna was bathed in a burning saline solution, but she overcame to enter the world. Two months premature and weighing just two and a half pounds, she spent her first couple of months in a hospital. Eventually, she entered the foster care system.

The failed abortion had also provided the “gift” of cerebral palsy, as she calls it: “It allows me to really depend on Jesus for everything.”
It also labeled her a hopeless case—an infant who was a ward of the state and for whom the expectations of achievement were extremely low. Doctors predicted Gianna would never even lift her head. She showed them: she began walking at three and has grown into a woman who has run marathons.

Amazingly, Gianna’s medical records from the day of her birth clearly state “Born during saline abortion.” And that’s just the beginning of the places where her grit and determination have carried her. Though the horrific hours of her birth initially drew attention, Gianna has so much more to say: “My life and my story didn’t begin and end at my birth.” What God has done in Gianna's has been a miracle. He has used her to stand before nations, including ours, to share her life's testimony.  Since 2012 she’s been speaking to millions in that country, sharing her life and faith on the country’s most popular afternoon talk show as well as other media outlets. A reporter for the Italian edition of Vanity Fair visited, writing a profile. Pope Benedict XVI conveyed her inspiring story in the Vatican newspaper. Halls of government have yielded floor time to hear her story as well. Gianna has testified before the Australian Parliament and British House of Commons.

Modern communications take her story where she cannot go herself. Two speeches—one at Yale and another in Australia—have made their way into China because of the connectedness the internet brings. The Yale speech was covered by a blogger whose work is read there. The Australia speech was filmed without her knowledge and released on YouTube. Every so often, it reappears on the internet and social media. No matter who the audience, she shares her strong faith. “I’m invading the culture as an unconventional woman, just being me,” she says. “The beautiful thing about having cerebral palsy is it’s part of my sermon. It’s my way of reminding the earth that heaven is real. My legs have become a net to act as a fisher of men.”